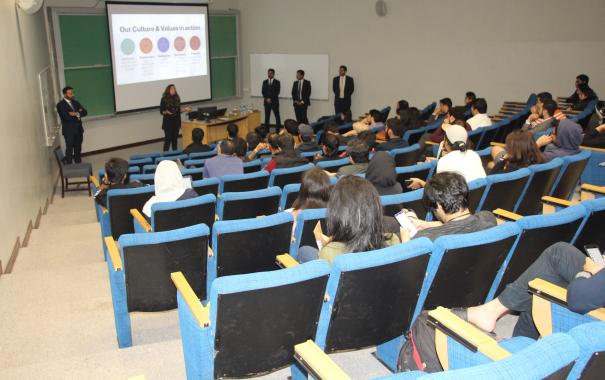 A.T. Kearney Middle East carried out its annual recruitment drive at LUMS on November 29, 2019. The team comprised of five consultants from their Dubai office; Hannan Ikram, Principal, Mohammed Dhedhi, Principal, Aania Alam, Manager, Ali Shahid, Associate and LUMS graduate, and Hassan Ayaz, Business Analyst and also a LUMS graduate. The drive was aimed at introducing LUMS students to the opportunity of working on some of the most important and impactful strategic issues in the region as an A.T. Kearney consultant.

The team explained that A.T. Kearney is a leading management consulting firm in the region. The firm is going through a rapid growth period, having doubled in size in the last 2 years. A.T. Kearney showed that it has strengthened its presence across top sectors throughout the Middle Eastern region such as in public sector, energy, chemicals, health, FMCG/Retail, and media and technology. The team also elaborated on A.T. Kearney's global presence across 40 countries and how it is positioned to work on strategy and CEO-agenda issues. Moreover, the team highlighted how the organisation invests in young consultants through trainings, mentoring and MBA sponsorship.

Mr. Ikram opened the session by introducing the firm to the students. He explained how A.T. Kearney globally is working with the majority of the largest private and public sector entities. He also emphasised how the quality of work is central to A.T. Kearney. He then explained how a young consultant has the amazing opportunity to work across a large spectrum of industries and experience many different sectors at a young age.

Mr. Dhedhi then explained to the students how A.T. Kearney is a uniquely positioned global management consulting firm that has a highly entrepreneurial mindset. He explained how a consultant at the organisation grows by ensuring success through its culture, its impressive clientele and capability development of its employees. He also explained what makes a good consultant and how A.T. Kearney can help driven and talented students reach their potential.

Ms. Alam talked about the values that A.T. Kearney follows in all of its operations and decisions. She explained how these values are central to the daily operations as well as strategic decisions. She also spent some time talking about the importance of culture and how the organisation is unique in the region in terms of its diversity as well as the welcoming attitude it has for all new joiners. Ms. Alam then called Mr. Ayaz, the youngest member of the A.T. Kearney team at LUMS, to share his experience. Mr. Hassan told the audience about the responsibility he was given at A.T. Kearney right from the beginning and how it helped him grow as a professional. He also explained to the audience how the firm invested in him by sending him to international trainings as well as local trainings as soon as he joined.

Mr. Shahid then explained to the audience what a work week looks like in A.T. Kearney. He talked about how rewarding it is to learn new things and help the clients solve some of their most difficult issues. He also explained the career path for a new joiner. He ended the presentation after explaining the recruitment process and next steps.

After a brief question and answer session, students were given the opportunity to talk to A.T. Kearney representatives individually and ask any further questions that they might have.