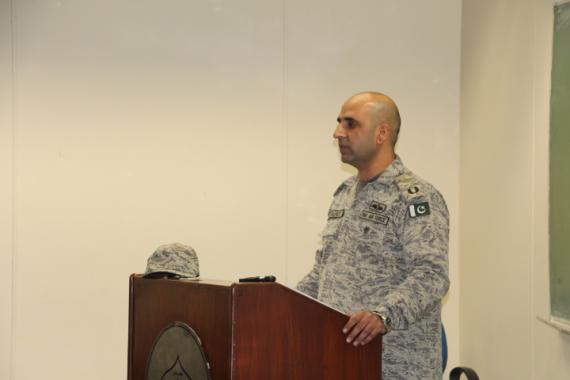 Pakistan Air Force (PAF) conducted their recruitment drive for multiple open positions in different branches on March 1, 2019 at LUMS. Squadron Leader (S/L) Amjad Imran, OC PAF Information and Selection Centre, Lahore, started the session with a brief introduction of himself and his 18 years in the Air Force. He further elaborated on PAF’s contributions during the 1965 and 1971 wars and its evolution over the years.

The Air Force has always remained in line with cutting-edge technology and has maintained its position as the most respected Air Force of the world. Discussing career opportunities, S/L Amjad told the students that PAF is hiring promising and enthusiastic youth in the officer cadre for following branches: (GD (P) / CAE/ Air Defence), Engineering, Accounts, Met, Education, Legal and Computer/ IT experts.

He further explained the selection procedure which includes the following steps:

In the end, he listed the perks and privileges PAF personnel cherishes during his career. He recommended students to apply in the Pakistan Air Forces not only to consider it as a job but to serve the countries. S/L Amjad concluded the session by taking questions from the audience.