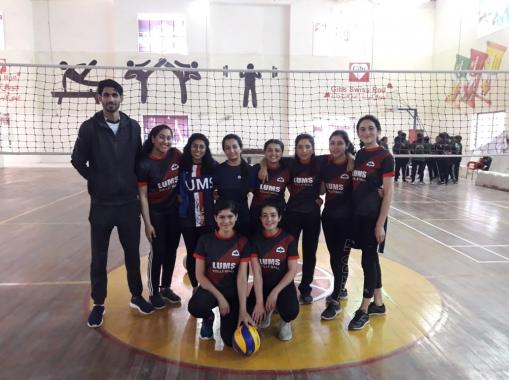 LUMS students continue to make their university proud. Under the captaincy of Zulfia Kiran, and the coaching of Mohammad Imran Shah, the LUMS Female Volleyball team were placed as the runners-up in the HED University Super League 2020 Volleyball Championship. The tournament, held from March 12-14 at Bahauddin Zakria University in Multan, marked the second round of the competition.

In the early rounds, the LUMS team earned a series of hard-fought victories against the University of Lahore, Forman Christian College and Government College University, and came out at the top of a pool of 58 teams. They were among the top nine teams that went onto compete in the second round, where they defeated contenders from Lahore College for Women University, Superior University, University of Management and Technology, University of Okara and the University of Veterinary and Animal Sciences by 2-0 in each game. Ultimately, after a tough match, the LUMS Volleyball team were defeated by University of the Punjab.

The Higher Education Commission of Pakistan selected five members of the LUMS Volleyball team to participate in the Volleyball Championship Camp that will take place in Lahore, and later in Sri Lanka, where they are hopeful to be named as the winners.

The team expressed their gratitude to LUMS, as well as the Sports at LUMS society, for their support, encouragement and management throughout the tournament.