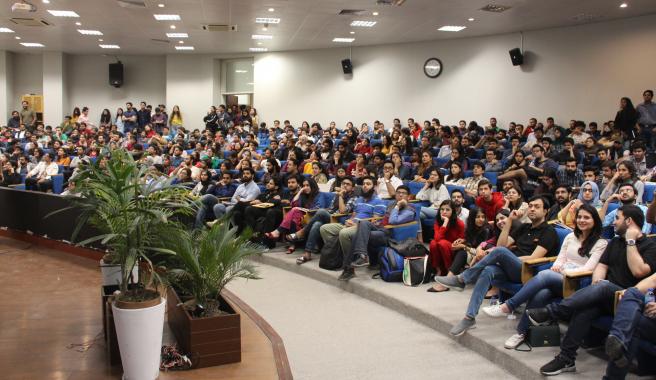 Mr. Cashmiri was invited on stage where he had a discussion with the audience about high street fashion and about the story of Khaadi. Khaadi started in 1998 with 400 square feet and now have over half a million square feet in terms of retail outlets. Around 25 million people visit the store both in Pakistan and in its international stores generating a revenue of PKR 25 billion annually. Their vision is to take the company to PKR 100 billion and are building a dynamic team to meet that vision. Mr. Cashmiri also mentioned that the company has a young team including a young CEO.

A short video was shown depicting how the Pakistani culture is rooted deep in the brand. Mr. Cashmiri talked about all of Khaadi’s brands, its main areas of focus, people development, diversity and inclusion at the company. He also spoke about their sustainability initiatives and how last year the sales revenue on August 14 were donated towards a better Pakistan. He also talked about the café they have opened in Karachi by the name of Kanteen and plans to launch six more in Pakistan this year.

Later, Mr. Shaikh explained the process for applying to the Khaadi Lead Management Trainee Programme and the Summer Internship Programme 2020. He announced that the top three interns will be given a conditional offer to join the KLMT 2021 cohort.

The session ended with an interactive Questions and Answers session, which was then followed by an online test.