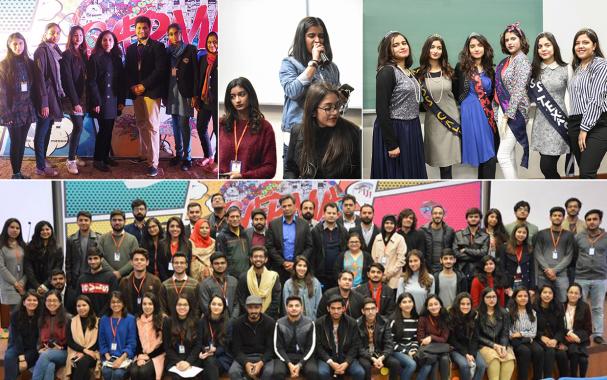 LUMS Daily Student (LDS), the premier journalism society of LUMS, hosted the 10th edition of its annual flagship event, Convention for Aspiring Reporters and Media Anchors (CARMA) from January 14-16, 2019. The convention provided a platform to future journalists, equipping them to serve society in an efficient and charitable manner. We had the privilege of hosting many aspiring journalists, who competed amongst themselves in various journalism competitions, from all over Pakistan. Moreover, we arranged several social events, such as Qawwali Night and Food Street.

Opening Ceremony
CARMA X formally began on January 14, which was perhaps the most eventful day. The opening ceremony witnessed the presence of Syed Talat Hussain, renowned Pakistani journalist, and Raza Naeem, a progressive writer and book critic. We hosted an interactive session with the chief guests on ‘The Evolution of Journalism from 1960s till today’. The session was quite productive for the audience, which gained insightful knowledge from the in-depth analysis of our prestigious guests on the subject.

Journalism Events
The journalism competitions commenced shortly after the opening ceremony. We hosted a total of ten journalism events, which catered to various categories of journalism, such as News Anchoring, Investigative Journalism, Photo Journalism, Print Journalism, Radio Journalism, News Reporting, Documentaries, and Vlogging. On the first day, we had the Investigative Journalism, Snap It, and Print Pandemonium events. Investigative Journalism tested the detective skills of delegates, who searched for clues in certain given scenarios and submitted a fact-finding report in the end. Snap It judged the participants’ photography skills, while Print Pandemonium involved a workshop on publishing software and required a newsletter to be submitted on the last day.
On the second day, we witnessed a hectic schedule of journalism competitions throughout the day. These included; Anchor It, Shoot Out and Discover the Difference, along with further rounds of Investigative Journalism and Snap It. Anchor It was a scenario-based event where delegates were required to act like a news anchor and host a TV show in a given scenario. Fatima Shaheen, a renowned news anchor, judged this event. In Shoot Out, the delegates were required to shoot a given situation and make a complete news report narrating the incident in the form of a video.

The third day mainly included further rounds of the aforementioned events, along with Voice Box, which was a radio journalism competition. We also had Vlogosphere and Public Service Message which required video submissions. Vlogosphere required the delegates to make a vlog of their experience at LUMS, while Public Service Message required them to make a short documentary highlighting a social dilemma. For Voice Box, we had invited Mr. Naeem to judge the competition.

These Journalism Events aimed to provide a platform for future journalists in Pakistan, who will one day go on to serve the society in an efficient and charitable manner. The overall winner of CARMA was Generation’s School, Karachi.

Qawwali Night
We hosted a thrilling Qawwali Night in the Central Courtyard on the evening of the event’s first day, January, 14. Shahzad Santoo Khan, a renowned qawwal, entertained the audience with his electrifying qawwalis. The entire Central Courtyard was packed with people. The audience comprised of delegates, LDS host team, and LUMS students, staff and faculty. This recreational evening provided a much-needed break to the delegates and host team.

Food Street
A scrumptious food street was set up on the evening of January 15 on the second day of CARMA, near the volleyball court. We had food stalls from various food vendors, including the LUMS Culinary Club. The food street provided necessary entertainment to delegates and the host team.

Closing Ceremony
CARMA X concluded on the night of January 16 with the awards and closing ceremony, held at the Library Lawn. We invited Asad Nizami, founder of Pakistan Today, and Amin Hafeez, a renowned news reporter at Geo News, as our chief guests. The guests addressed the gathering, where they highlighted the opportunities for aspiring journalists in the media industry. This was followed by the awards distribution and dinner, which concluded the ceremony.