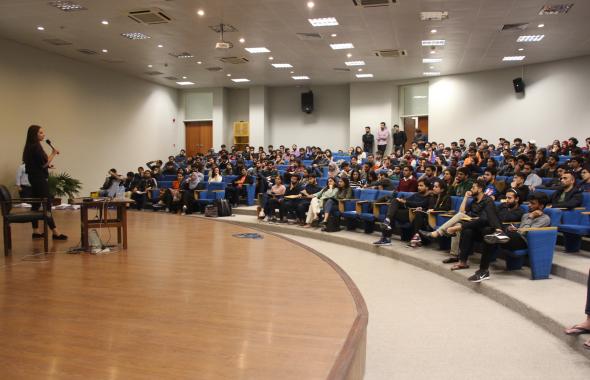 The 7Vals recruitment drive was held on Monday, February 17, 2020. Mahnoor Ayub, Solution Consultant and LUMS alumna, started the session by sharing some important facts about the company and what they deal in. She shared that 7Vals is named after a set of seven core values that David Logan, author of the pioneering book Tribal Leadership, defines as the foundation for robust leadership. These values are important to adopt as a team, as collective values lead to uniform decisions, stable growth, and high performance. She said that initially they used to have two products, and in a very short period of time they have grown to a three product service company. Ms. Ayub also spoke about their worldwide customers that include CNN, BBC, Netflix, Microsoft, Amazon, Disney, NASA, Intel etc.

Muhammad ur Rehman, Product Associate and LUMS alumnus shared his experience of working at 7Vals. He explained that 7Vals is one of the most co-operative, fast paced and product diversified companies he has worked with. Mr. Rehman shared the various vacancies available at 7Vals and explained the daily routine at the organisation.

Later, Rabia Mughal, Communication Manager was invited on stage. She shared that she joined the company a year ago and is having an amazing experience working at its Digital Marketing department. She also spoke about her work experience of working in San Francisco for several years, after studying Journalism.  Ms. Mughal guided, motivated and encouraged the young students to explore opportunities at 7Vals.

The session ended with an interactive Questions and Answers session followed by an online written test.